This redheaded female sadist made her slave a promise. It was the day she brought him home from the slave market. One day her knife would slip between his legs and cut something off. Maybe his penis, maybe his testicles. Maybe even both.
He would never know when that day had arrived. His anticipation would surely fade. After he relaxed her knife would finally fulfill he words.
The slave has never forgotten. His dread has never abated. Mostly it is latent. Some nights she locks him to a bondage frame. Out comes the knife. With seeming carelessness the sharp edge caresses his skin. Occasionally his fleshed is nicked or lightly sliced.
He watches her eyes. There is no pity, no humor. Inside she’s laughing. Her slave’s trembling never fails to amuse her. She knows no blood lust. There is no real plain to maim him.
But she is a woman of whims. What may happen tomorrow or next year don’t interest her. Even if they haunt her slave. That is what he is there for. 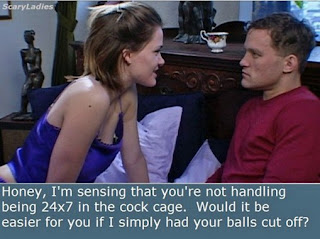 An exceptionally kind Mistress Owner offers her slave man a choice: eternal orgasm denial with all the stress and strain or castration.
Castration is irreversible but may put the inferior male mind at ease.
Which would you choose? Perpetual sexual frustration or being neutered?